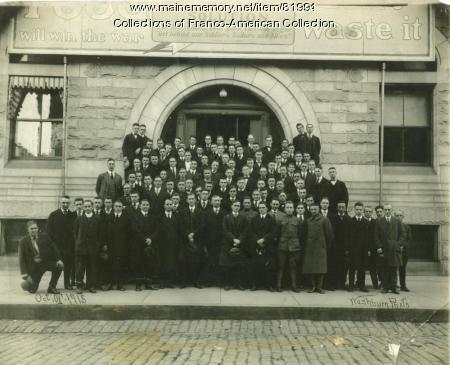 In this photograph Lewiston's Mayor and Council members pose with army recruiters and recruits before their departure for the First World War. By 1918, the draft had been expanded to all men aged 18 to 45, and 100,000 US servicemen were arriving in France every day.

Those pictured in the front Row include Mayor Charles Lemaire (center, with mustache) and city council members; George Bérubé is sixth from the right.

The large billboard in front of City Hall reads "Food Will Win the War: Don't Waste It. Solution: Eat less wheat, beef, pork, fats and Sugars. 'Get behind our Soldiers, Sailors and Allies.'"