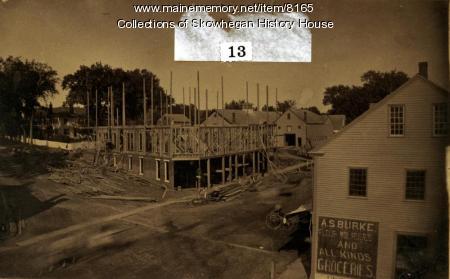 "This shows the building named in the title, in process of construction, indicating that the picture was taken in 1883. Beyond the building just referred to may be seen the Parlin homestead. The Skowhegan Public Library has since been built just this side. At the right, in the foreground, appears a wooden building.

His store faced Madison Avenue. A white line from the Prescott store across toward Madison Avenue incidates the location of a plank crossing. Streets in those days were unpaved and these foot walks offered the only means of getting across without wading, either through dust or mud.

To the right of Hotel Coburn may be seen two or more wooden buildings. The most prominent of these are stables which perhaps escaped destruction at the time of the burning of the Brewster House.

On the Prescott Building will be seen the sign of A. S. Burke. He was located in the Prescott store and for a time served as County Treasurer. He was prominent in the politics of the Greenback Party. Walter H. Poulin, formerly of Monson, and afterward a resident of that town, was employed by him."