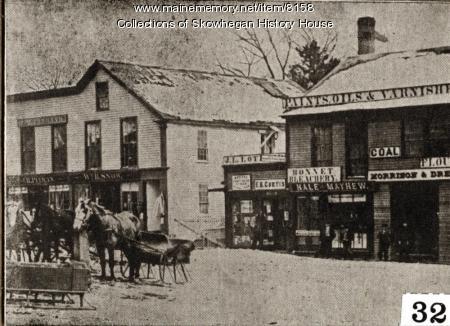 "This is evidently an impression from a wood cut, rather rare in later days. Building in center was occupied by Joseph H. Philbrick, brother of William and George Philbrick, as a clothing store. Mr. Philbrick was at one time postmaster of Skowhegan and this location was used by him or someone else as a postoffice. Later George Philbrick, already mentioned, became the owner of this property and for many years carried on a jewelry store there. About 1887 this structure was moved back to the bank of the river and a fine brick block, still standing, took its place. Here the jewelry business was continued, Mr. Philbrick after his death being succeeded by his son, John R. Philbrick. The property was finally sold to John C. Griffin, who now occupies it as an insurance agency. The building which shows at the left of the picture was undoubtedly utilized for the manufacture and sale of furniture by Robert Tuttle. E. F. Fairbrother (Foss) later carried on the same business there, he being succeeded by Wentworth & Oak, these partners being Joseph P. Oak and Herbert Wentworth."