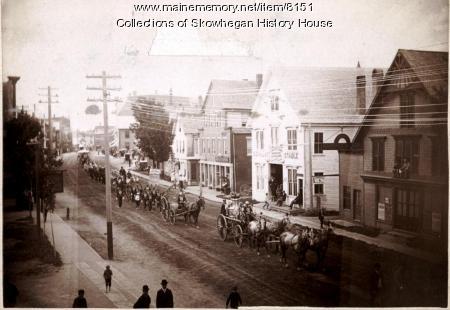 "Building in the shadow at right was probably owned and occupied by Frank (Jock) Moore, who very likely is one of the two men to be seen on the narrow verandah, second story. Observe the big poster in window, with the word "Celebration". This indicates that the parade in the street is part of a Fourth of July observance.

Note small sign of Peter Lessor, shoe repairer, just to the right of the livery stable of Green S. Hill. The sign, "John W. Delano," indicates a blacksmith shop, which stood back from the street at the rear of this alley. The location of the G. S. Hill stable is now occupied by the Masonic Building, built by Fred C. Dunlap.

The top of the Court House dome, removed many years since, shows over the top of the stable, just referred to. Just beyond the alley, which is still vacant, shows the old Bakery Building sold to Fred Tuscan in 1924. It gets its name from the fact that James Harmon many years ago produced bakery products here, mostly crackers. The Borden Block has been built in place of the building which shows just beyond the bakery. The maple tree in this picture disappeared long since. The pool room and another brick building just beyond, built by the late R. W. Brown, in part from bricks salvaged at the time of the removal of the High Street Christian Church, now occupy some portion of the street between the Borden Block just mentioned and the Court Street corner. Coburn Hall may be seen in the background.
<BR><BR>
On the left may be seen the top or coping of the old Reporter Building. This was built by the Town of Skowhegan for a public hall. James G. Blaine and other distinguished men spoke there during the time that it was used for this purpose."