Item 8145 - Southerly Side of Water Street, about 1890
Contributed by Skowhegan History House
Item 8145 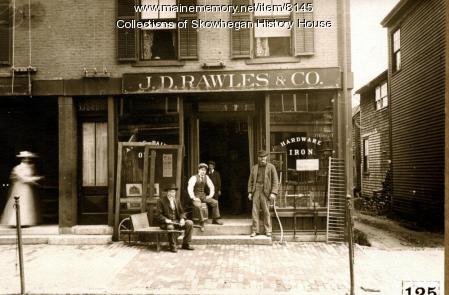 "Picture shows part of the Dinsmore Block, one of the first Skowhegan structures. Alley at right has been filled in and is now occupied by Guy L. Conant as a clothing store. "J. D. Rawles & Company" indicates a hardware store carried on here for a long time. A preceding proprietor was E. B. Coffin, who also managed a stage route from here to Bingham and other up river points. Screen doors covering the tools indicate that the picture was taken in the month of June. Seymour Rawles, son of the proprietor, is seated on a nail keg near the doorway. Man on wheelbarrow is Ed. T. Allen, who lived at the corner of East Front and Cedar Streets. Man at his right is unidentified. The interior of the Rawles store is shown in picture Number 72. The lady at the extreme left is possibly Mrs. J. D. Rawles."