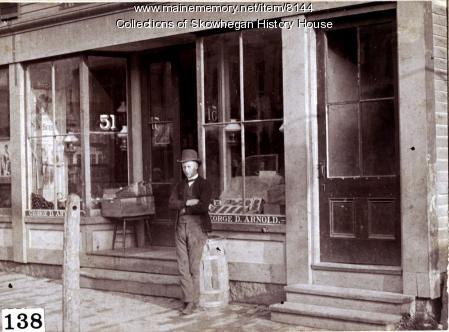 "Showing structure at one time occupied by Frederick Hoyt, as a shoe store. This picture was probably taken about 1884.

"The young man is Harry Foster, who was a clerk for George D. Arnold, grocer, for many years. This building was burned long since and the location is occupied by Hotel Oxford, the Woolworth store being one of the tenants on the ground floor.

"As we have mentioned Foss Fairbrother and Frederick Hoyt, we must as briefly as we can tell a story which concerns them both, and the scene of which was in this building. Foss was calling one day on Uncle Hoyt, a man not given to garrulity. After some minutes of silence, the latter gentleman said: 'Foss, do you like gin?' Mr. Fairbrother replied that other beverages were more to his liking, but that gin would do, in the absence of anything else.

"Still other minutes went by. Finally Mr. Hoyt arose, went to the shelf and pulled out a shoe box, which had nothing to distinguish it from others of its kind. Taking therefrom a bottle, he helped himself to a swallow or two, replaced the cork, put the bottle in the box, then the box on the shelf. After seating himself quite leisurely, he said: 'Glad you like gin. I plan to take one drink a day.'

"We are sure both Mr. Hoyt and Foss will forgive us for placing this incident on record. They both had a keen sense of humor."