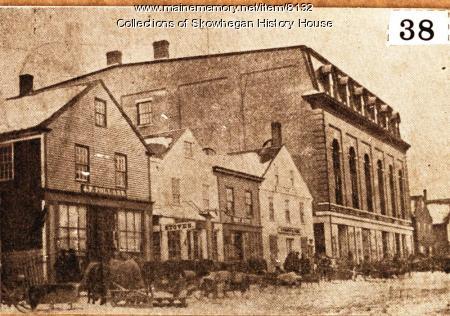 "Building at left, carrying sign of J. F. Pollard, indicates general store conducted by him in this location, which is now a part of the J. P. Merrill Block. Two buildings to the right are still standing, although largely changed in appearance. The sign, 'Stoves,' very likely indicates the occupancy of William Doran. The plough over this building has a rather odd and old fashioned appearance.

The building next to Coburn Hall was destroyed by fire with that structure. It was occupied as a stove and tinware store successively by George Gray, Gray & Foss and Heald Brothers. Beyond Coburn Hall may be seen the Neal store."