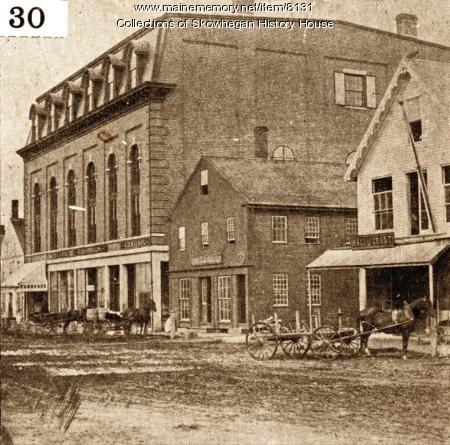 'Prominent building is Coburn Hall. Sign on the awning, 'Farrand,' indicates a clothing store. Just to the right of Coburn Hall is a building occupied successively by Eben H. Neal, Patten & Neal, Neal & Wentworth and George Wentworth. The earlier years of this period the business was a general store, but later was devoted chiefly to groceries. The Griffin Block, occupied by the Ordway dry goods store, is now on the location.

Vacant land to the right of the Neal store is now the location of a brick building, once used as a post office, but now occupied by the Poulin & Laney Clothing Store. Wooden building at the right carries the sign of Grant and Hall. It was here that Walter P. Ordway commenced his long career as a dry goods dealer. Truck team in front of this structure is said to be the property of Hiram Thyng.'