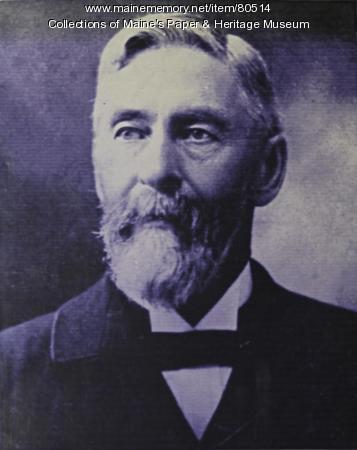 Alvin Record, born in Greene in 1829, moved with his parents to Moose Hill in the Livermore Falls area when he was 14. After the Civil War, Record purchased a building in Livermore Falls that had been converted from a dairy factory to a saw mill. He in turn converted it to a leatherboard mill.

Leatherboard was a wood product that, when pressed into cardboard and combined with an imitation leather grained surface, was used for binding books. It was also used in the manufacture of shoes.

In 1877, Record purchased the water rights from the dairy factory and constructed a dam across the Androscoggin River and added a small pulp mill located near the leatherboard mill. He employed 60 men with a monthly payroll of $1,300.

After Hugh Chisholm built the Umbagog Paper Mill in Jay, Record built a second mill a short distance up the river at the Jay Bridge. The river is divided by an island and dams were built on both sides of it. Record installed two paper machines there and the mill was known as Jay Paper Company. Three years later, Record built another small mill with two more paper machines. Along with a saw mill, the complex became known as the Falmouth Mill.

By 1890, the area became quite prosperous so Mr. Record, who had been helping people with their finances, and about a dozen other prominent people, started a local banking institution. In 1895, the Maine Legislature granted a charter to the Livermore Falls Trust and Banking Company.

Because of two fires and other problems, Mr. Record eventually sold his mills to the Otis Company who also purchased the Umbagog Mill in 1896. The venture became known as International Paper Company.