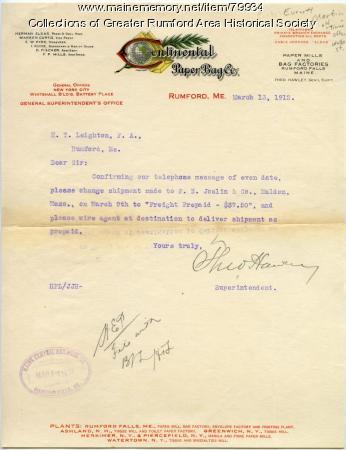 This note, signed by Continental Paper Bag Company Superintendent Theo Hawley, indicates that an order has been pre-paid and should be marked as such. The note is dated March 13, 1912.

The Continental Bag Company, incorporated May 28, 1899, produced its first brown bag by August, 1899, although the company dated its official beginning to 1900. Its more than 150 machines were producing 1,000,000 bags per day before its demise in 1936. At that time, its equipment was dismantled and shipped by rail cars out of Rumford.