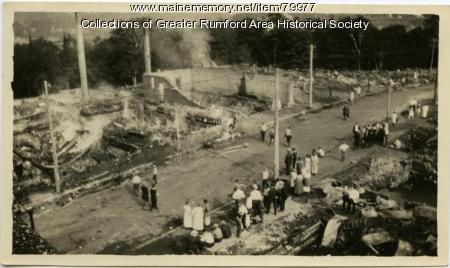 Onlookers take in the aftermath of the Waldo Street fire on August 2, 1923. The fire was first discovered at 5:10 p.m. by the Majestic Theater’s stage carpenter, Eli Roy. The Rumford and Mexico Fire Departments were not sufficient to put out the blaze, so the Auburn and Lewiston Departments were called in. They arrived by train at 8:30 p.m. and the flames were out by 11:00 p.m.

However, the six-hour blaze did significant damage. Burned to the ground were three restaurants, 12 stores, a garage, a bakery, three barber shops, the Majestic Theater, three pool halls, a 30-bed rooming house, a harness shop, sheds and storerooms, and at least 77 tenements.