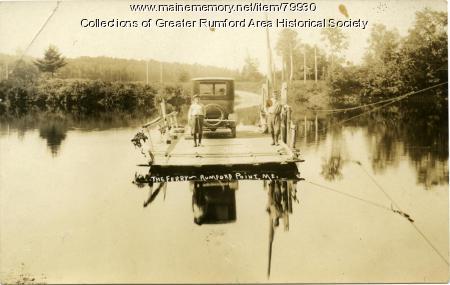 Porter Kimball later built another boat and soon sold it to Charles A. Kimball, son of Moses Kimball. In 1876, Franklin Martin purchased the ferry from the Kimball family. He sold the business two years later to Roscoe Knight. In 1902, Alvin Goddard bought the business. Succeeding owners were John F. Martin, who hired a man named Will Richardson to operate it for him; William Barker; James “Jack” Farren; Charles “Al” White; and finally, Jack Farren again, who hired Esko Neskanen and Ernest Bubier as ferrymen.

In 1942, the town purchased the ferry from Mr. Farren. Isaac “Ike” Easter was hired to operate it until the Martin Bridge was completed in 1955. Ike Easter was the last ferryman on the Androscoggin River.