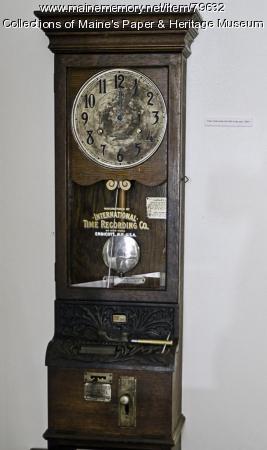 This time clock, made by the International Time Recording Company (ITRC), was used in the Otis mill in Jay. A card with the employee's name printed on it was inserted into a slot on the clock, a lever on the front was pushed down, and the current time was printed on the card. The lever was put back into the original position and the card withdrawn. The employee inserted the card on entering work at the start of the work day and again at the end of the day's shift. At the end of the work week, the payroll clerk added up the hours worked in order to establish the amount to be paid.

The ITRC, based in Endicott, New York, was formed by George W. Fairchild to be used as a selling agency for Bundy Manufacturing Co., Willard & Frick Manufacturing Co., and Standard Time Stamp Co. In 1901, ITRC purchased the Chicago Time-Register Co., the Del Ray Register Co. in 1907, and the Syracuse Time Recording Co. in 1908. There is no data about which one of these acquired companies first made this particular time clock, but the vintage is circa 1910.