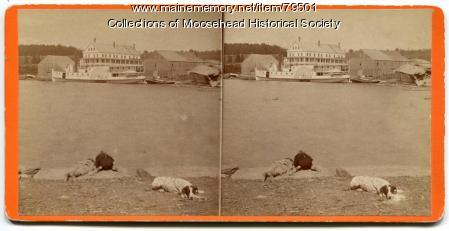 This photograph shows two young children lying on the ground, apparently peering over a stone slab into the water of East Cove on Moosehead Lake some time around 1880. The steamer Gov. Coburn is in the background docked at the Lake House.

The Gov. Coburn, a side-wheeler with walking beam, was built by Major Benjamin Bigney in 1869 and continued service for about 25 years.Her first captain was Thomas Robinson.

In her day the Gov. Coburn was a palatial craft of the double-decker type and with her passing went one of the most picturesque of the old order of lake boats. In addition to transporting, freight, passengers and the mail the Gov. Coburn was used to tow booms of logs.