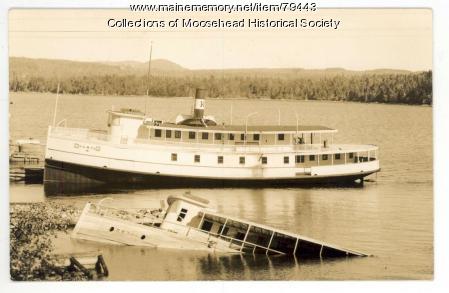 This photograph of the steamers Katahdin II and Twilight II Steamers shows them at Shipyard Point on Moosehead Lake around 1940. The Twilight II is on its side and mostly sunken.

The Katahdin II was christened in 1913. She has a steel hull and was built at Bath Iron Works. The pieces of the ship were then shipped in sections by rail to Greenville, where she was assembled. The Katahdin II is 115 feet long with a 26 foot beam, 8 foot draft and a large upright boiler. As of 2013, the Katahdin II is still in use for scenic cruises.

Both steamers operated for passenger travel and towed booms of wood on Moosehead Lake to the Kennebec River log drives. The Twilight II and the Katahdin II were also both part of the fleet of the Coburn Steamboat Company.