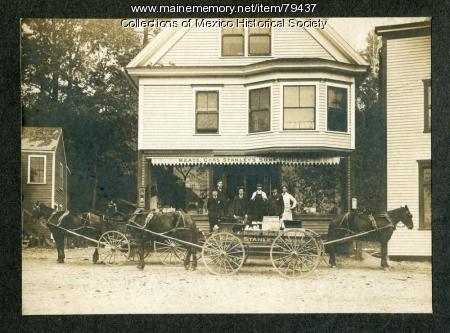 This photograph shows the Charles Stanley and Sons Market, located at 41 Main Street in Mexico Village, as it looked in early 1900s.

Charles Stanley founded his namesake grocery store in Mexico. Eventually he also opened one in Dixfield. After Stanley retired, his sons continued operating the store under the same name for 30 years.

An add in the 1906 Directory written by A. R. Turner publishing Company reads "A.M. Stanley C.L. Charles Stanley and Sons, Groceries, Meats and Provisions and a full line of canned goods, Mexico and Dixfield. We also carry a full line of Gent's furnishings,Boots, Shoes, and Rubbers at our Dixfield store. Telephone connections between both stores."