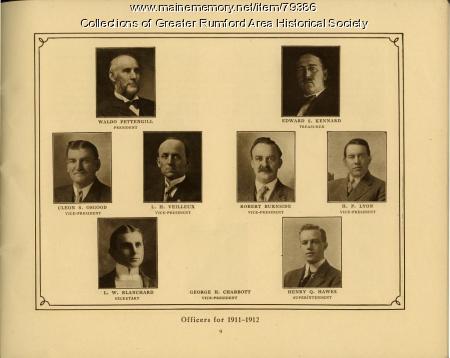 The Rumford Mechanics Institute was founded by Oxford Paper Company owner Hugh J. Chisholm, as part of his "model town" concept, and intended to offer the "wage earners of Rumford the best quality of physical and mental, social and moral improvements, at the lowest cost."

The President, Waldo Pettengill, was a close associate of Chisholm's, and acted as his purchasing agent for the riparian rights along the Androscoggin River. The other persons pictured here were business associates and friends of Chisholm.

This image is from the "Mechanics Institute, Rumford, Maine" booklet handed out at the building's ribbon cutting on November 9, 1911. It was published by University Press, Cambridge, Massachusetts.