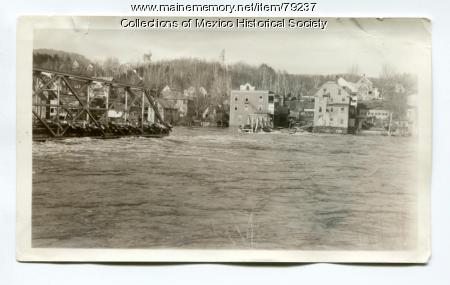 From March 11 to March 23 1936, the Androscoggin River overflowed its banks. This image depicts the Ridlonville to Rumford bridge as it was being swept down the Androscoggin River on March 19. Rising water in the Oxford Paper Co. mill yard swept 5,000 cords of pulp wood into the angry river, creating a maelstrom of logs and ice that smashed against the 43 year old steel Ridlonville Bridge, and carried it downstream.

The flood was a product of 17 snow and rainstorms that blew into Maine during the first three weeks of March 1936. The rapid freezes and thaws coupled with the increased water levels from the storms finally led to the Androscoggin River overflowing its banks on March 12 at which point the destruction from the swollen river, awash with pulp and ice, ensued.

In the background of this photograph is the Packard block.