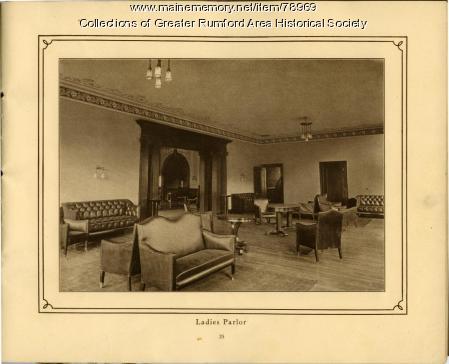 The Mechanics Institute in Rumford was completed and dedicated on November 9, 1911. It was conceived and founded by Oxford Paper Company owner Hugh J. Chisholm to provide a recreation and educational center for the people of the community.

The Board of Governors established an organization of an Association to be known as the “Rumford Mechanics Institute Auxiliary Association,” to be composed of the women of the towns of Rumford or Mexico of not less than eighteen years of age, for the purpose of social and literary intercourse among the members thereof, the instruction of said members in domestic science and other similar pursuits, and the physical, mental and moral development of said members.
According to the by-laws of the Mechanics Institute Board of Governors, “After the organization of said Auxiliary Association the Board of Governors shall aid, encourage and advise said Association in the promotion of its objects and purposes and shall arrange for the use by it of such portions of the Association’s Home at such time as it may deem advisable”.

This image is from the "Mechanics Institute, Rumford, Maine" booklet handed out at the building's ribbon cutting on November 9, 1911. It was published by University Press, Cambridge, Massachusetts.