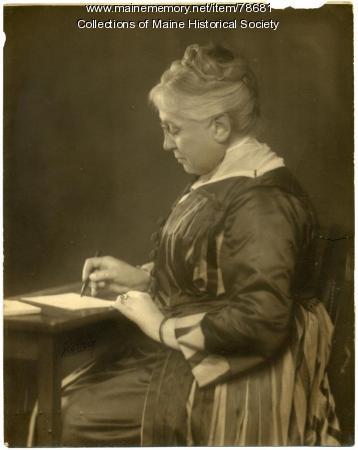 Eunice Nichols Frye of Portland (1852-1923), a native of Vassalboro, was the founder of the Woman's Literary Union in Portland in 1889, and of the Maine Federation of Women's Clubs in 1892.

She and her husband, George C. Frye, were active in a number of philanthropies, including the "Wayside Rest or Home for Worthy Women," of which Mrs. Frye was the first president. It later became the "Invalid's Home," the "Mary Brown Home for Women." George Frye made a large donation to the home with the stipulation that it be renamed the "Eunice Frye Home."

She attended Oak Grove Seminary, a Friends school in Vassalboro, and was later the principal of Unitarian Friends' School in Orchard Park, N.Y.

In discussing the need for women's study clubs, Frye noted that women needed to keep their minds busy, something she learned from working at the Bloomingdale, N.Y., Asylum where her brother, Dr. Charles Nichols, was managing physician.

She and George Frye, a chemist who manufactured hospital and surgical equipment, married in 1880.