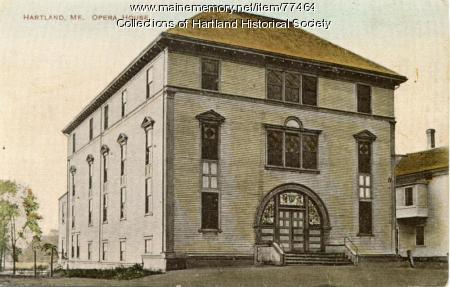 "Hartland has a public hall at last." So reads the headline of the March 3, 1892, Pittsfield Advertiser describing the completion of the Hartland Opera House. Two years previously, the town had voted to loan its credit for $2000 to assist in building suitable accommodations for a public hall with rooms above for civic organizations including the Masons and Odd Fellows. The building was proclaimed to be one of the "finest and most commodious structures of its kind" to be found in the area.

In 1897, the orginal opera house burned, but was rebuilt immediately and for approximately the same cost as the original.

The opera house was the scene for many evenings of entertainment. In 1912, the Hartland Hall Association was granted the right to have movies.

At the 1959 town meeting, voters approved having the town acquire the stock of the Hartland Hall Association so as to have the building as a town hall.