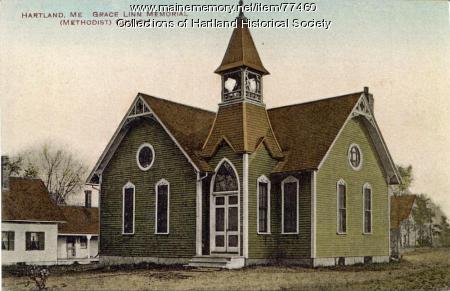 The Methodist Episcopal (M.E.) church of Hartland was organized in 1870, and meetings were held in the academy building and later at the Central Hall. The first pastor appointed was the Rev. James H. Moor.

Construction of the above church was done by Amasa Moor at a cost of $2800. It was dedicated March 26, 1884, as the Grace Linn Memorial Church in honor of Mrs. Linn, who was one of its earnest supporters and a faithful worker. Mrs. Linn was the wife of Archibald Linn, founder of Linn Woolen Mill, and it is said that her funeral was one of the first services held in the church.

The caption on this postcard reads "Hartland, ME. Grace Linn Memorial (Methodist) Church."