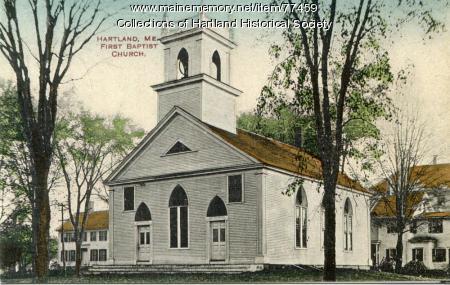 The First Baptist Church is the oldest church in Hartland. The site of the church was purchased from Henry Warren in 1841, and the present church built in 1842. Prior to that, meetings had been held in the St. Albans Academy building.

The church was initially known as the St. Albans and Hartland Village Church, but that entity was dissolved in 1847. That same year, under the leadership of Joseph Ireland, Edward Page, Christopher Webb and several others, the present Baptist church was organized.

The caption on this postcard reads "Hartland, ME. First Baptist Church."