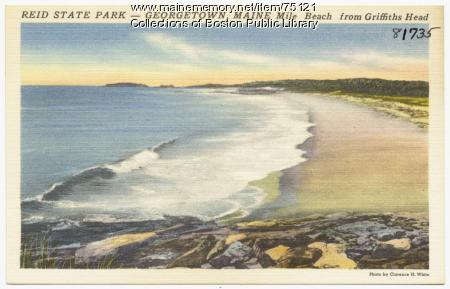 In 1946 Walter Reid, a native of Georgetown who made his fortune in shipping, gave 610 acres to the people of Maine for the purpose of making a park. This area became Reid State Park, located on Georgetown Island.

The Tichnor Brothers printing company published this type of postcard circa 1938 as part of their Maine series. These, and other postcards, by the Tichnor Brothers Company are officially known as the Tichnor Gloss Series because the photographs were notoriously retouched on such a level that does not allow the postcards to be classified as photographs or paintings. The caption reads, "Reid State Park -- Georgetown, Maine, mile beach from Griffiths Head."