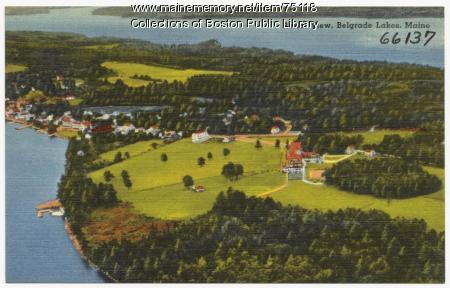 Belgrade was first settled in 1774, and the Town was incorporated in 1796. In the early days, most of its citizens earned a living by farming or working in its several grist and lumber mills. Gradually, however, residents started commuting to nearby cities for employment.

With the arrival of the railroad in the later 19th century and the shift away from mills and factories in the 20th century, Belgrade became mostly a tourist town.

Belgrade covers about sixty square miles, with a large part of this area composed of lakes, streams and wetlands. Its five lakes and their inlet/outlet streams offer several species of fish, birds and plenty of water. With the forest acreage expanding, as former farmland reverts to tree growth, deer, moose and birds have become more plentiful as well.

The Tichnor Brothers printing company published this type of postcard circa 1938 as part of their Maine series. These, and other postcards, by the Tichnor Brothers Company are officially known as the Tichnor Gloss Series because the photographs were notoriously retouched on such a level that does not allow the postcards to be classified as photographs or paintings. The caption reads, "Aerial view, Belgrade Lakes, Maine"