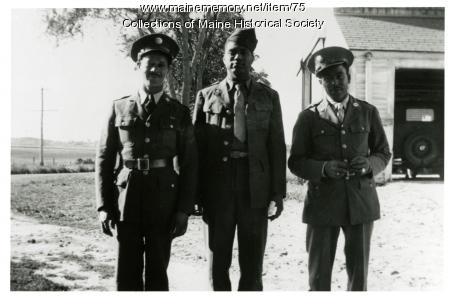 Three soldiers, part of a unit of Black soldiers assigned to guard railroad bridges that connected Maine and Canada during World War II, were stationed in North Yarmouth.

On the reverse is written, "With best wishes to all, Dawson H. Carney, William G. Scott, 1942. This photograph was taken in front of the Arthur Atkins farm in North Yarmouth. The soldiers were stationed at the Grand Trunk Railroad bridge over the Royal River that cut through Atkin's farm. Bridge was guarded 24 hours a day. House, barn, and bridge are still there today." Carney stood on the left.