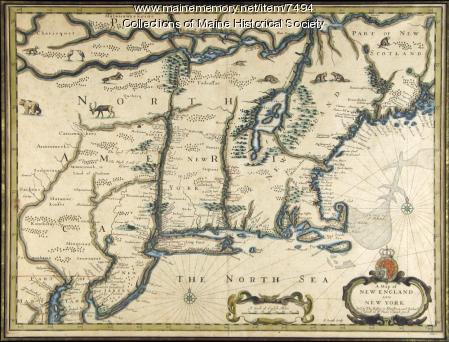 British cartographer John Speed's (ca.1552-1629) map of New England and New York was based on map series by Dutch cartographers Jansson and Visscher. Rather than reading colonial maps as factual representations of land, we should examine them as political documents. Speed's map demonstrated the colonial transition of New Amsterdam to New York, emphasizing England's place as the dominate colonial power in the region.

Indigenous place and tribal names, albeit incorrectly spelled and placed, are inter-referenced with English or anglicized place names. By prioritizing European place names, the map attempts to erase Indigenous Homelands at a time when Native peoples were in firm control of their territories. This document makes the “new world” look uninhabited—instead of the reality of Indigenous authority and millennia of living in the region. The presence of animal illustrations like beaver, bear, fox, egret, ermine, elk, and otter demonstrate the importance of native natural resources to the European market, particularly the extractive fur trade.

This map first appeared in John Speed's 1676 world atlas "Prospect of the most famous parts of the world," sold by Thomas Basset and Richard Chitwell of London. Printing on the reverse indicates this particular map was removed from an atlas.