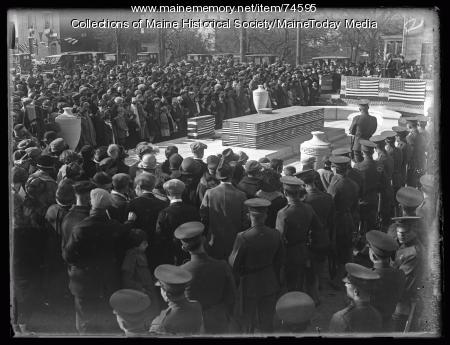 Spectators surround the World War Memorial dedicated to Maine's soldiers and sailors. The memorial was located at a small park at the approach of the inter-state bridge between Kittery and Portsmouth, N.H.. The dedication services began at 11 am on November 11 1924, Armistice Day. Frank G. Farrington, President of Maine Senate; General Albert Greenlaw, Chairman Committee of Veterans; Governor Percival P. Baxter; and Colonel Albert Beliveau, Department Commander of American Legion were the featured speakers at the event.

Miss. Baska Paeff designed the bronze statuary for the memorial, which represented "peace emerging from the horrors of war". The statuary rested on a granite base. The memorial's cornerstone read "1924". A number of artifacts were placed in a bronze casket sealed beneath the cornerstone. A few of the items buried were; an honor roll of men from Maine who lost their lives in the World War, the addresses of Baxter and Greenlaw, a history of the Kittery-Portsmouth bridge, public State laws regulating the bridge, a message from Baxter to future Mainers, pictures of Baxter, bridge engineer Walter Henry Norris and Miss. Paeff.

This was the first State Memorial in Maine's 105 year statehood.