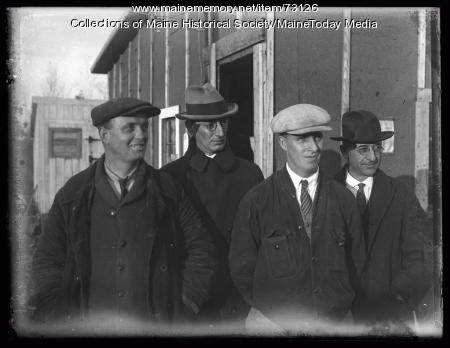 This photo was taken during Portland Water District's construction of the new intake and conduit from Sebago Lake and appeared in the Portland Evening Express & Advertiser on December 9, 1924.

The original gate and screen house, built in 1869 by the Portland Water Company, had been in use for 55 years but were not low enough to provide water to Portland in the event of another great fire. To remedy this, a new intake house was built with water entering 20 feet below the surface and then through five sets of double screens into the main pipe line, 45 feet below the surface.

The success of the construction of tunnels so far below the surface was dependent upon this team of experts.