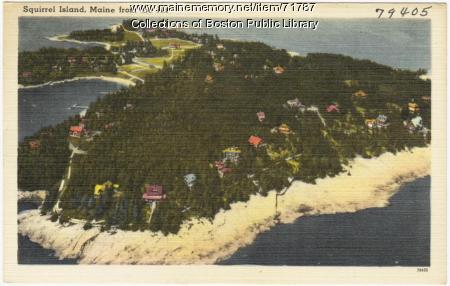 Squirrel Island, Maine is a summer resort colony off the coast of Boothbay Harbor. The origin of the name is said to be not related to its squirrel population but the shape of the island.

Squirrel Island has no industry, and residents must vacate for the winter due to the above-ground plumbing which is drained to prevent freezing. The island receives telephone, electric and water utilities via undersea cables and pipes from the mainland.

Residents are not allowed vehicles and must walk on a network of paved sidewalks. A ferry boat (the Novelty) runs regular trips from Boothbay Harbor. Being a summer colony, the island is popular among young adults in search of a summer job, working at venues such as the local restaurant or the historical society, among others.

The Tichnor Brothers printing company published this type of postcard circa 1938 as part of their Maine series. These, and other postcards, by the Tichnor Brothers Company are officially known as the Tichnor Gloss Series because the photographs were notoriously retouched on such a level that does not allow the postcards to be classified as photographs or paintings. The caption reads, "Squirrel Island, Maine from the air."