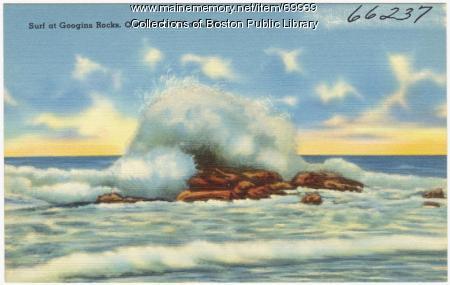 Old Orchard Beach has been promoted as a tourist destination since 1631. In 1829 the first Public House opened, and in 1837 tourists paid $1.50 each to stay at a local farm. Railroad service between Boston and Portland opened in 1842. Over the years Old Orchard developed into a major resort. Airplanes took off from the beach and auto races were held on the sand. Most of the large hotels were destroyed in the fire of 1907. The oldest hotel still standing on the beachfront in Old Orchard as of 2012, is The Ocean House Hotel & Motel, circa 1895, located at 71 West Grand Avenue.

The Tichnor Brothers printing company published this type of postcard circa 1938 as part of their Maine series. These, and other postcards, by the Tichnor Brothers Company are officially known as the Tichnor Gloss Series because the photographs were notoriously retouched on such a level that does not allow the postcards to be classified as photographs or paintings.The caption reads, "Surf at Googins Rocks, Old Orchard Beach, Me."