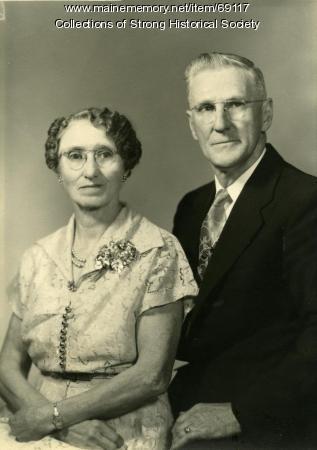 Lester Royal Lewis (1888-1974), with his wife, Mabel E. Smith (1888-1968), by his side served the community for 50 years. At the age of seventeen, "Roy" took a position at the local pharmacy operated by Charles E. Dyer. He interned there, learning all aspects of the business. When Mr. Dyer passed away Roy purchased the business, received his certification and operated Lewis Drug Store for thirty years, often opening after hours to dispense special medications for a sick child.

In addition to his trade, music and photography were Roy's passions. He was a gifted musician, playing the brass in local bands, and singing in the choir at the Methodist church. The images he captured with his camera served to record the ever-changing community and its residents.

On May 22, 1955 Main Street, through the village, was closed for a couple hours for a public tribute to Roy & Mabel on their retirement. Done in a "This Is Your Life" format, it was attended by hundreds of community members, all expressing gratitude and wishing them well.