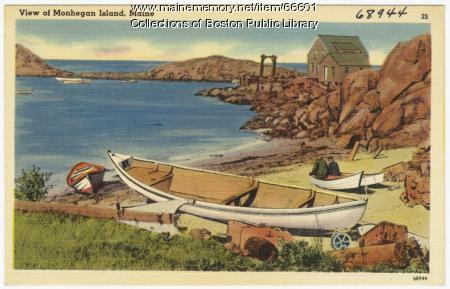 The name Monhegan derives from Monchiggon, Algonquian for "out-to-sea island." Europeans used Monhegan as early as 1603 for seasonal fishing and fur trading. In 1839 Monhegan was incorporated as an island plantation and as of 2012 remains a thriving fishing location.

The Tichnor Brothers printing company published this type of postcard circa 1938 as part of their Maine series. These, and other postcards, by the Tichnor Brothers Company are officially known as the Tichnor Gloss Series because the photographs were notoriously retouched on such a level that does not allow the postcards to be classified as photographs or paintings. The caption reads, "View of Monhegan Island, Maine."