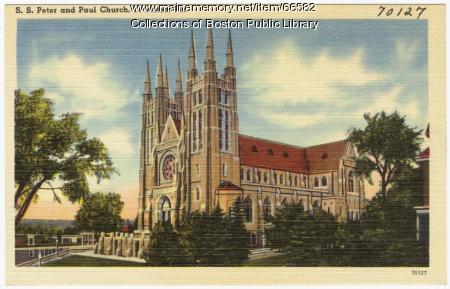 Saints Peter and Paul Church in Lewiston was modeled on a European Gothic cathedral and administered by the Dominican Fathers of Lille until 1986.

Toward the end of the 19th century, the small parish housed in a small Gothic church in the city, attended mostly by French Canadian immigrants, was expanding and required a larger building. Plans for a new church began in 1889, at which point the lower church was constructed. Though the original church was demolished in 1905, over the ensuing decades, building progress was halted for various reasons, including an error in foundation digging, ethnic tensions, and insufficient funds. Work resumed in 1928 using plans by Boston architect T.G. O’Connell that modeled the structure on an English Norman version of a Gothic cathedral. The cornerstone was laid in 1934 and the interior was completed in 1938. The church was dedicated on October 23, 1938 in a ceremony overseen by the Bishop of Portland and attended by thousands of constituents.

The caption reads, "S.S. Peter and Paul Church, Lewiston, Me."

The Tichnor Brothers printing company published this type of postcard circa 1938.