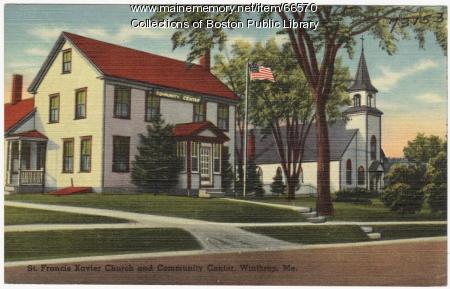 St. Fancis Xavier parish was the first and only catholic parish to take root in Winthrop. Though it did not take until the later half of the 1800s, once the community was established it continued to grow, regularly increasing its charitable efforts.

The Tichnor Brothers printing company published this type of postcard circa 1938 as part of their Maine series. These, and other postcards, by the Tichnor Brothers Company are officially known as the Tichnor Gloss Series because the photographs were notoriously retouched on such a level that does not allow the postcards to be classified as photographs or paintings. The caption reads, "St. Francis Xavier Church and Community Center, Winthrop, Me."