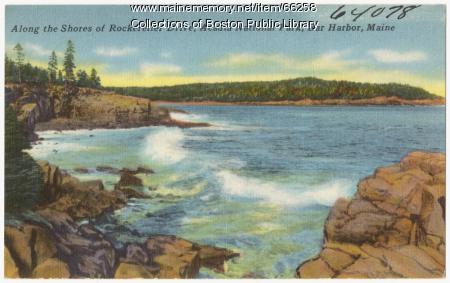 The area now known as Acadia National Park first attained federal status when President Woodrow Wilson, established it as Sieur de Monts National Monument in 1916. In 1919, it became a national park with the name Lafayette National Park in honor of the Marquis de Lafayette, an influential French supporter of the American Revolution. The park's name was changed to Acadia National Park on January 19, 1929.

From 1915 to 1933, philanthropist John D. Rockefeller, Jr. financed, designed, and directed the construction of a network of carriage trails throughout the park. The network encompassed over 50 miles (80 km) of gravel carriage trails, 17 granite bridges, and two gate lodges, almost all of which are still maintained and in use as of 2012.

The Tichnor Brothers printing company published this type of postcard circa 1938 as part of their Maine series. These, and other postcards, by the Tichnor Brothers Company are officially known as the Tichnor Gloss Series because the photographs were notoriously retouched on such a level that does not allow the postcards to be classified as photographs or paintings. The caption reads, "Along the shores of Rockefeller Drive, Acadia National Park, Bar Harbor, Maine."