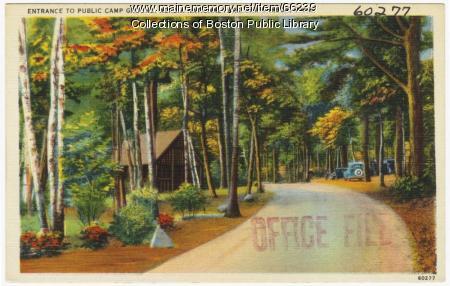 The caption reads, "Entrance to Public Camp ground, Acadia National Park, Bar Harbor, Maine." This is most likely a view of one of the Civilian Conservation Corps built campgrounds in Acadia, either Blackwoods or Seawall. In the 1930s the CCC was established, set up two camps on Mount Desert Island, and worked within Acadia National Park building and maintaining trails and roads, building these two campgrounds and performing many other forestry tasks.

The Tichnor Brothers printing company published this type of postcard circa 1930-1945.