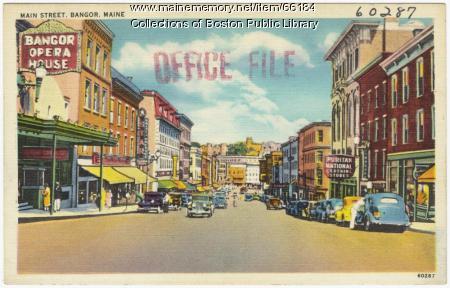 A Tichnor Brothers postcard of Market Square, the historic district and shopping center, of downtown Bangor.

On April 30, 1911, embers from a hayshed near the Kenduskeag Stream ignited nearby buildings, sparking the Great Fire of 1911 in Bangor. The fire destroyed most of the downtown area.The area that was destroyed by the fire is listed on the National Register of Historic Places as the Great Fire of 1911 Historic District, while the portion that survived the fire is the 'West Market Square Historic District'.

The Tichnor Brothers printing company published this type of postcard circa 1938 as part of their Maine series. These, and other postcards, by the Tichnor Brothers Company are officially known as the Tichnor Gloss Series because the photographs were notoriously retouched on such a level that does not allow the postcards to be classified as photographs or paintings. The caption reads, "Main Street, Bangor, Maine." The Bangor Opera House is on the left.