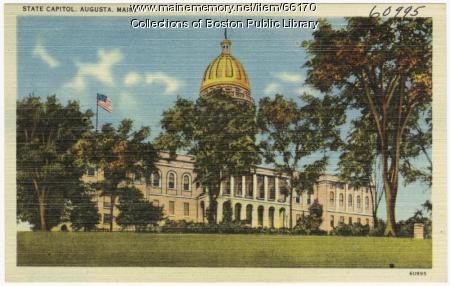 A Tichnor Brothers postcard of the Maine State House in Augusta. The State House was built between 1829 and 1832, when the Legislature first convened in the new building. When Maine became a state in 1820, the Portland was the capital. It was moved to Augusta because that city was more central.

The Tichnor Brothers printing company published this type of postcard circa 1938 as part of their Maine series. These, and other postcards, by the Tichnor Brothers Company are officially known as the Tichnor Gloss Series because the photographs were notoriously retouched on such a level that does not allow the postcards to be classified as photographs or paintings. The caption reads, "State Capitol, Augusta, Maine."