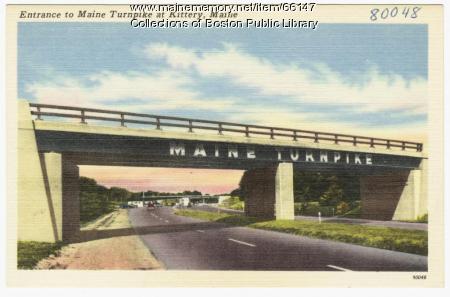 The entrance to the Maine Turnpike in Kittery in the first years of its operation. The Maine Turnpike, which opened in late 1947, was created to relieve congestion on route one and facilitate easier car travel from Kittery to Fort Kent.

The Tichnor Brothers printing company published this type of postcard beginning in the 1930s as part of their Maine series. These, and other postcards, by the Tichnor Brothers Company are officially known as the Tichnor Gloss Series because the photographs were notoriously retouched on such a level that does not allow the postcards to be classified as photographs or paintings. The caption reads, "Entrance to Maine Turnpike at Kittery, Maine."