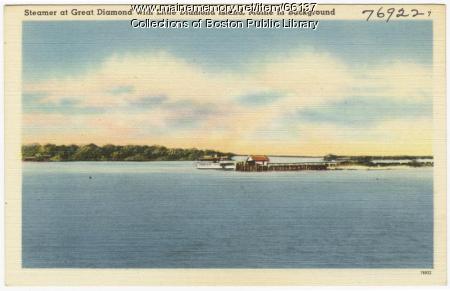 Great Diamond Island is an island in Casco Bay that is of the city of Portland. The island is accessible from the mainland by boat.

Diamond Cove was initially an artistic retreat community. At the time of the Spanish American War, the island was converted almost entirely to a military base to defend Casco Bay. Fort McKinley was constructed between 1891 and 1907 and remained in service until the end of World War II in 1945. It has since returned to a residential community.

The Tichnor Brothers printing company published this type of postcard circa 1938 as part of their Maine series. These, and other postcards, by the Tichnor Brothers Company are officially known as the Tichnor Gloss Series because the photographs were notoriously retouched on such a level that does not allow the postcards to be classified as photographs or paintings.The caption reads, "Steamer at Great Diamond with Little Diamond Island, Maine in background."