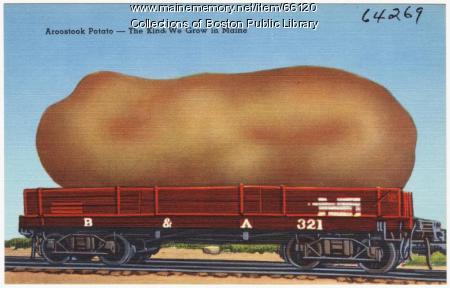 A humorous postcard from around 1935 promoting potatoes grown in Aroostook County. When this postcard was made there were more than 6,000 potato farms in operation, growing seed potatoes as well as tablestock.

Dick Curless, a native of Fort Fairfield in Aroostook County, built a successful country music career using the lore of the Aroostook potato industry. His 1965 hit "Tombstone Every Mile," which reached number five on the national country chart, chronicles a long-distance trucker's harrowing drive through the Hainesville Woods to deliver potatoes to Boston.

The caption reads, "Aroostook Potato -- The kind we grow in Maine." The Tichnor Brothers printing company of Boston published this type of postcard circa 1930-1945.