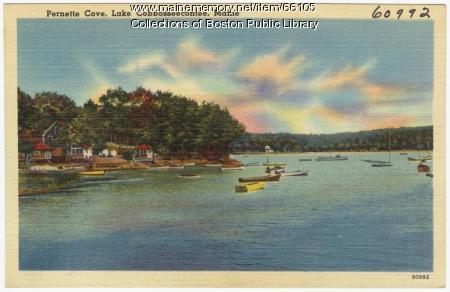 Sailboats and other pleasure craft in Pernette Cove on Lake Cobbosseecontee around 1935.

One of central Maine's largest bodies of water, Lake Cobbosseecontee has been a popular tourist destination since the end of the 19th century. Many early 20th century visitors purchased postcards like this one, published by the Boston firm Tichnor Brothers, Inc.

The Tichnor Brothers printing company published this type of postcard circa 1930-1945.