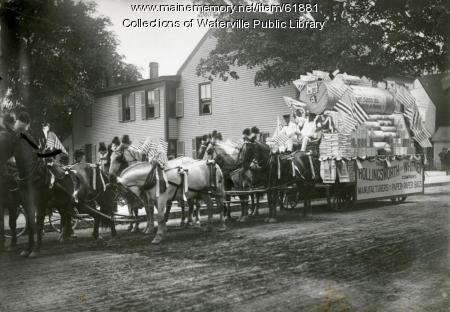 All of Waterville, and even people from Winslow, came to the parade during Waterville's centennial celebration in 1902. The Hollingsworth & Whitney Company, now Scott Paper Company, had a float in the parade held on June 24. Although the mill itself was in Winslow, many of its employees lived and shopped in Waterville, making it an integral part of Waterville's economy.

In the 1902 Centennial History of Waterville, William Abbot Smith described the float, saying, "The Hollingsworth & Whitney Company had a notable exhibit drawn by six powerful horses. The lower part of the float was made up of the various kinds of paper their mills turn out and on the top of all was a giant roll of paper 148 inches wide, weighing 5,250 pounds and measuring seven and one-half miles in length."