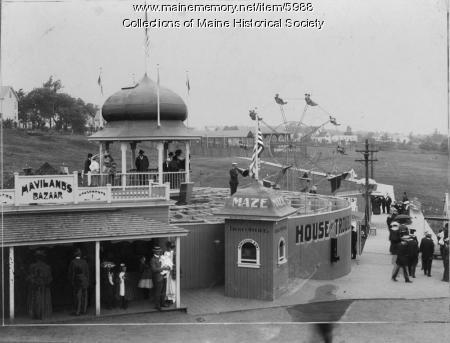 Around 1900 this photograph was taken of the Seaside Park, Maze, and Summer Theater in Old Orchard Beach.

The Old Orchard Beach amusement park, Palace Playland, dates back to 1902 and sits on four acres of beachfront property. Old Orchard Beach was home to the first carousel in the United States. It was also home to other family friendly rides such Noah's Ark, a boat-shaped fun-house with hand-carved figures of Noah and his family.

In 1820 the first Public House opened in Old Orchard Beach, and in 1837 tourists paid $1.50 each to stay at a local farm. Railroad service between Boston and Portland opened in 1842. Over the years Old Orchard developed into a major resort. Airplanes took off from the beach and auto races were held on the sand. Most of the large hotels were destroyed in the fire of 1907. The oldest hotel still standing on the beachfront in Old Orchard (as of 2012) is The Ocean House Hotel & Motel, circa 1895, located at 71 West Grand Avenue.