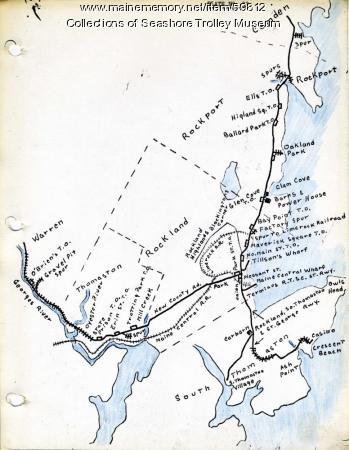 A hand-drawn map showing the electric railway trackage in the Rockland/Rockport area. The Rockland, Thomaston, & Camden Street Railway began operations in 1892. Expansion continued on the line until 1903. The freight and express operations between Rockland and Camden during this time were quite extensive. Oakland Park, a popular tourist destination, was located on this line. The system was abandoned in 1931.

The Rockland, South Thomaston, & St. George Railway opened in 1906 and extended through Rockland, past the casino at Crescent Beach, and out to the town of Owls Head. This trolley line was one of the least successful of the Maine street railways and the entire system was abandoned in 1917.

This is Plate 33 of the Maine Electric Railway Atlas, drawn by Charles D. Heseltine and edited by O.R. (Osmond Richard) Cummings in 1970.