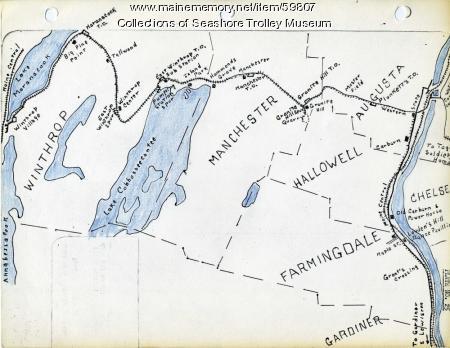 A hand-drawn map of the electric railway trackage through the towns of Gardiner, Augusta, Manchester, and Winthrop. This road was originally built by the Augusta, Hallowell, & Gardiner Street Railway in 1890. It was Maine's second electric street railway. The line was taken over by Augusta, Winthrop, & Gardiner Street Railway. Expansion continued until 1909. Island Park, a popular tourist destination with an open air dancing pavilion and a theater, was developed by the railway company on the shores of Lake Cobbosseecontee. The Winthrop line was abandoned in 1928. All other trackage on this map was abandoned in 1932.

This is Plate 25 of the Maine Electric Railway Atlas, drawn by Charles D. Heseltine and edited by O.R. (Osmond Richard) Cummings in 1970.