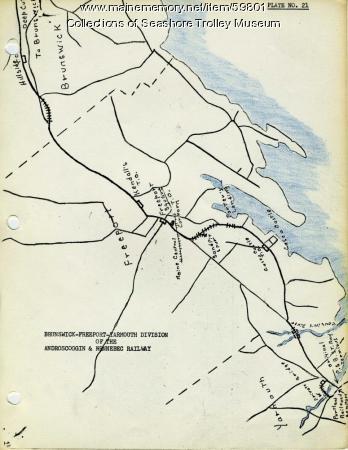 A hand-drawn map of electric railway trackage in the Freeport area, featuring the Brunswick, Freeport, & Yarmouth division of the Androscoggin & Kennebec Railway. The line was opened in 1902. This important segment of track provided freight and express operations for the Lewiston electric rail system as it was connected with the trackage of the Portland Railroad Company. The location of Casco Castle, a popular tourist destination developed by the trolley company, is visible on the coastline. Operations over the entire line between Brunswick and Yarmouth were abandoned in 1929.

This is Plate 21 of the Maine Electric Railway Atlas, drawn by Charles D. Heseltine and edited by O.R. (Osmond Richard) Cummings in 1970.