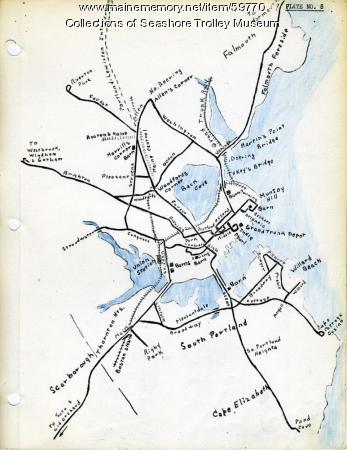 A hand-drawn map of the Portland area electric railway trackage. In 1891, the old horse railway line from Monument Square to Morrills' Corner was electrified. Ongoing development of the trolley lines continued until 1917 when the lines began to be abandoned. The Rosemont line that served Park, Deering, and Brighton Avenues was the last to be abaondoned in 1941.

Note on this map the various car barns and trolley tracks intertwining with steam rail trackage. Also on this map are three popular tourist destinations developed and served by the various electric railways: Willard Beach, Cape Cottage Casino and Theater, and Riverton Park.

This is Plate 8 of the Maine Electric Railway Atlas, drawn by Charles D. Heseltine and edited by O.R. (Osmond Richard) Cummings in 1970.