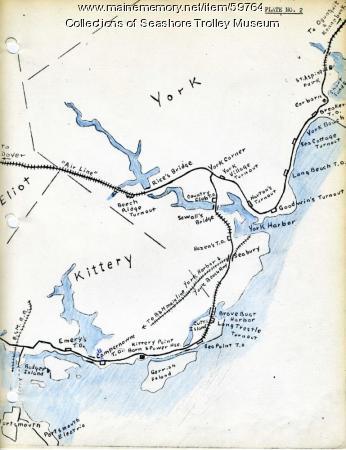 A hand-drawn map of the Atlantic Shore Line street railway trackage from Kittery to York Beach. The line from Badgers Island to Kittery Point was opened on August 12, 1897 by the Portsmouth, Kittery, & York Street Railway. It extended to York Village on October 6, 1897 and then on to York Beach on June 30, 1898. The short extension to St. Aspinquid Park was completed in 1900. Note the turnouts, carbarns, and power houses.

This line ultimately continued on to Kennebunk and was the final link in the Portland to Boston trolley route. The track was abandoned on March 17, 1923.

This is Plate 2 of the Maine Electric Railway Atlas, drawn by Charles D. Heseltine and edited by O.R. (Osmond Richard) Cummings in 1970.